This will probably be the last “complicated” thing to get used to but it is the last “basic knowledge” thing. You should try to fully understand this. Some might say that it belongs to the rules but I think it is rather just a logical extension of the rules. Correctly scoring games will be much easier once you learn this.

It is quite natural that there comes a point when a group of connected stones is impossible to capture. With really large groups you usually do not have to worry about them as it is unthinkable that something so big could get fully surrounded without capturing some of the invading stones first. However, with smaller groups, there often comes a time when you have to ask yourself, “Is this really safe?”

The most basic thing about living groups you will hear everywhere is two eyes, two eyes, two eyes! What does it mean? Why does everyone love two eyes so much? It is simple. Thanks to the “no self captures” rule, there can never be a stone on the board that has no liberties and that means that a group with at least 2 separate eyes is utterly impossible to capture (unless the owner fills an eye themselves).

A group with two separate eyes is impossible to capture.

Check out the following diagram. Black is COMPLETELY surrounded in the center of the board. Only two liberties left. It is White’s turn. Black is laughing in the face of danger! His group is utterly immune to capture. 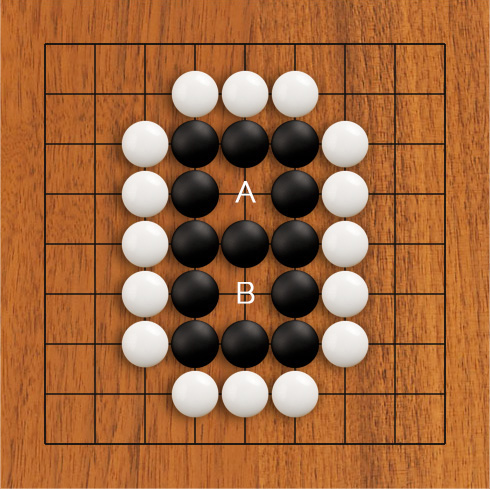 Does that mean that you have to create two eyes like this for every group? Certainly not. You just need to make sure that none of your groups can be prevented from creating two real eyes, should things turn nasty. Did you notice how I said real eyes? Yeah. It will be clearer after you study the examples but you really need to make sure that the eyes are well connected to the rest of the group. If part of the eye can be captured, then the whole group might collapse.

And that’s it. You have to remember that the “eye” needs to be safely connected to your group. If it can be captured separately from the rest of the group, it will not save you. We call such an eye a “false eye”.

Before trying to kill a group by taking away the eyes, remember that you first need to make sure that it is safely surrounded and cannot escape. Otherwise you just wasted a move and gave your opponent a free prisoner if he/she manages to break out and live.

Let me get back to this one later
I understand,
what's next?