While capturing opponent’s stones is not the ultimate goal of Go, it is a way to make points and is certainly fun.

A stone or a group of stones is captured when it no longer has any empty space (vacant intersections) directly next to it (following the lines, NOT diagonally). See below.

The empty points next to a stone are called liberties. 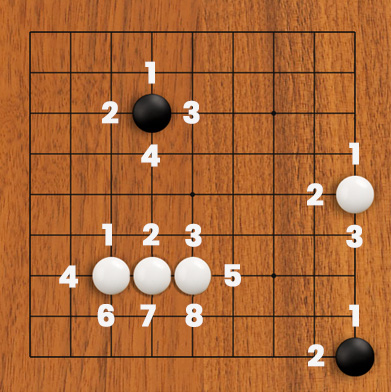 If a stone or a group of stones has only one liberty left, we say that it is in Atari (danger of immediate capture). 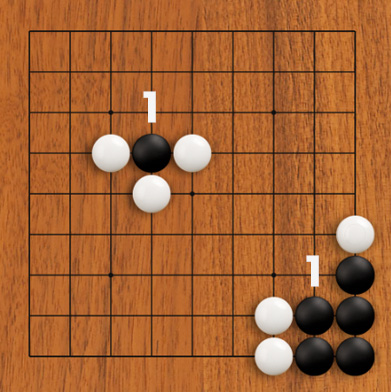 In the example above, Black’s lone stone and the group of 5 stones are both reduced to a single liberty and thus can be captured with the next move (neighboring intersections except 1 are occupied by white stones).

If you fill the last liberty of your opponent's stone, that stone is removed from the board and added to your â€śprisonersâ€ť, where it is worth a point. The same applies to groups of several stones (you get a point for each stone).

Let’s practice, shall we? (It is blackâ€™s turn in each puzzle!)

In reality, capturing stones is not so easy. Your opponent will not just wait for you to surround their stones but there are some tactics you will learn in later lessons to help you.

Let me get back to this one later
I understand,
what's next?